A fish with a sword-like structure on the front for combat purpose! Sounds like some weird creature that came straight out of a fictional comic book, doesn’t it?

Luckily, it’s one of those fascinating creations that nature has gifted us in the form of a Swordfish.

Due to its aggressive appearance, most people are intimidated of using it in their kitchen. However, this has not stopped fish enthusiast around the world from using it as a part of their recipes. In fact, swordfish culinary is amongst one of the luxury aquatic life treats.

So, what does Swordfish taste like? Let's find out!

Swordfish is the only aquatic creature with its own family – Xiphiidae. Swordfish belong to a category of apex marine fish predators called Billfish. They have a distinct physical characteristic that makes them one of the most unique sea creatures.

Swordfish is characterized by its signature pointed, long and flat bill or snout that share a striking resemblance with the traditional sword.

They have a round and elongated body structure and can reach up to the maximum length of up to 4.5 m, and the maximum weight of up to 650 kg.

Swordfish is typically found on major ocean bodies such as Indian, Atlantic, and the Pacific Ocean.

The taste of Swordfish may come as a surprise to many people who have never tried it previously. Swordfish has a very dense texture and is probably one the meatiest fish along with the likes of Pompano fish. 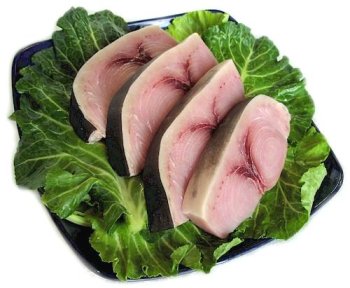 Swordfish has a subtle sweet flavor, and the meat remains consistently moist even after cooking. Due to its meaty characteristic, Swordfish is most ideal for either broiling or grilling, although there are more than adequate methods to prepare it.

Swordfish are predatory creatures that depend on smaller marine creatures such as crustaceans. So, if you get a hint of crawfish taste, you know what it has been feeding on.

If you’re someone who appreciates an elegant piece of steak, you will surely love the texture and the taste of a swordfish as well.

Apart from making your taste buds sing, swordfish meat is also rich in supplying some of the most crucial nutritional compounds that our body needs. Swordfish is an excellent source of protein. In fact, it is amongst the richest source of protein amongst all the type of marine fishes.

Swordfish also has a multitude of potential health benefits, thanks to its rich and abundant nutritional composition.

How to Cook Swordfish

Swordfish is one the easiest fish to cook, mostly because you don’t have to worry too much about extracting the bones. Their extremely meaty feature and moist characteristic make them an ideal ingredient to incorporate with almost any form of cooking techniques.

However, two of the most common methods of cooking a swordfish are pan-fried and grill. Grilling Swordfish in specific is the most widely accepted technique due to its convincing thick meat texture similarity with a steak.

Swordfish also does not need to be garnished excessively for grilling. Just marinate the meat for about 10-15 minutes or simply season it with black pepper, salt, and apply a stroke of olive oil on both sides.

Let it sit on the grill for about 3-8 minutes (for each side) until they turn brown. Garnish it with a zest of lemon, coriander, and thin slices of onion. You can also use a suitable salsa recipe or any herb of your liking.

Swordfish provides you with a completely unique taste experience, unlike the usual types of fishes. If you're looking to experience a mouthful of marine flavor (literally), a steak of Swordfish is your ideal marine fish choice. They might cost you some extra bucks but are completely worth every single penny.