Don’t we all love fried and baked foods.

Some people might object from a health perspective, but you cannot deny that everything tastes good when made with using fat. One such fat is Crisco shortening.

But what makes it so special? And most importantly, does shortening go bad?

Crisco is United States’ number-one food brand for shortening. It has been around for a long time, dating back to the Great Depression era and even in that time, its sales were successful.

Crisco shortening is less expensive than other alternatives and has a considerably low percentage of harmful fats (source).

Furthermore, its no-gluten formula enables softer and flakier foods and not to mention its long shelf life.

What Is Shortening Anyways? 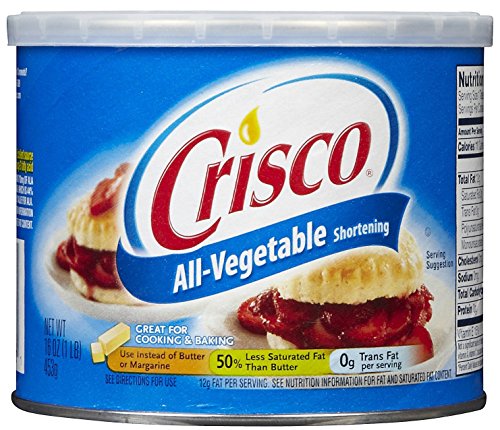 Shortening is a fat that remains solid at room temperature such as lard and margarine. According to Healthline, it is now commonly made from fully hydrogenated vegetables oil.

Shortening is made from vegetables oils such as cottonseed, soybean or refined palm oil.

These oils naturally remain liquid at room temperature, but the hydrogenation process changes their chemical structure, resulting in a thick and solid texture.

Most people use Crisco shortening in baking (recipes) to prevent gluten formation, which helps make a soft and pliable dough. It “shortens” the gluten strands to create flaky, tender or crumbly goods – hence the name shortening.

It is also used in frying because of its high melting point and heat stability, which produces less greasy products.

How to Store Crisco Shortening Properly?

After opening the shortening package, always close it tightly and put it back in the storage place.

If the packaging has holes or is damaged, transfer it into an airtight container. The shelf life of Crisco depends on how you keep it and how often you use it.

Shortening is reusable after cooking, but make sure it does not spoil or contaminate.

Let it cool and filter it through cheesecloth layers to remove all food particles before storing it. You should filter it in its liquid form and pour and store it in an airtight container.

Store it in a dry and cool area away from strong smells, direct sunlight and heat sources like dishwasher, stove or fridge.

Keeping it away from heat is important, as stated by TheKitchn. The pantry is ideal for storing it, but be mindful that reused shortening will only last for several weeks depending on usage.

The cupboard is another storage option if you do not have a pantry. Again, it should not be situated above the stove.

If you reside in a hot region, refrigerating it will make it thicker and firmer, but it can be easily brought back to a normal temperature. Just take it out of the fridge a half-hour prior to using.

For long-time use, you can also freeze the shortening. It’s better to use a silicone ice-cube tray for this purpose.

This way, whenever you need it, you just need to scoop out some cubes, thaw them and use them immediately.

If the Crisco Shortening is stored properly, its shelf life can be extended, resulting in healthy eating, low food cost and less wastage.

For bakers and professional cooks, shortening can never go to waste. It is used in so many goods that there is no chance of spoiling, but it does go bad.

Luckily, you can prevent these problems.

Like other oil-based items, shortening has a long shelf life, as stated by StillTasty. It comes with a Best Used By date or Best By date instead of an expiration date or Use By date.

Hence, it can possibly be used for cooking and baking after the Best Used By date has passed. However, be sure to check for bad signs first.

The degradation process begins after the package has been opened. The fresh air interacts with the fat, which causes fat oxidation and the oils to go rancid.

On the bright side, it is a slow process that takes months, so you will have a long time to utilize it before it goes bad.

Unopened Crisco shortening can stay up to two years, whereas an opened can will last for one year. The exact date is printed on the bottom of the can.

As for unopened Crisco shortening sticks, the time limit is also one to two years. However, for an opened package, it will go bad after six months.

The date is given on the side of the plastic tub.

People mostly believe that shortening will never go bad because it is 100% fat. This is why in many kitchens, you will find it placed near a stove without any care.

However, improper storage such as an open container or being placed close to heat can cause spoilage even before the estimated time.

Spoiled shortening can be easily spotted because its appearance, smell, color and taste will become very different from its original state, as indicated by eHow.

The best way to check if your shortening has rotted is by smelling and tasting.

Firstly, the color will be different. It will darken as the shortening gets older from a milky white color to something yellowish.

The texture will also become harder, and it will taste stale. Also, check for mold growth and sniff it.

If it gives off a rancid or musky smell, throw it away because your shortening has gone south.

If you place the shortening under sunlight or near a stove, it will go bad because humidity and moisture will speed up the degradation process.

Similarly, if you keep it in an uncovered container or handle it with unwashed hands or spoons, it will not last a long time.

It is unlikely that using spoiled shortening will cause you harm, but it will ruin any cooked item by giving it an awful taste.

However, proper hygiene and safety methods can stop shortening from going bad.